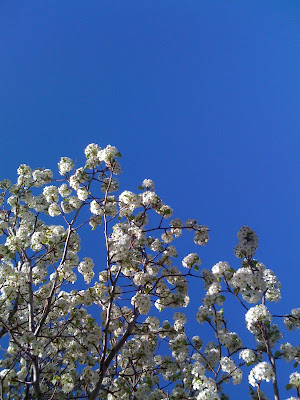 AT LEFT: "MY" CHERRY TREE IN BLOOM LAST SPRING.

The cherry tree that nuzzles up to my front porch is about to blossom. This isn’t just any cherry tree. For one thing, I live on the border of a Denver neighborhood known as Cherry Creek North, and I like to boast that this is one of the last of the old- guard cherry trees in Cherry Creek.

A TREE PLANTED BY A BIRD

The tree, my father guessed, must have been “planted” by a bird because nobody would place a sapling so close to a house, allowing no room for growth. The tree’s roots run into my house’s foundation.
About 15 years ago, a wet autumn snow burdened the cherry branches and nearly toppled the tree, leaving the crown leaning way out over the sidewalk. Several neighbors suggested I might have to cut the tree down.
I refused. I couldn’t bear to see the tree destroyed, not to mention the robins’ nest in its crotch. I decided to give the cherry tree another year.

CHERRY PIE ON THE 4TH OF JULY

So when that next spring the tree rallied with blossoms, I rejoiced. By Independence Day, the limbs were loaded with brilliant red cherries. To celebrate, I found a recipe for an old-fashioned cherry pie with a crust finished with decorative pastry cherries and leaves. When I took a slice to my nearly-90-year-old neighbor across the street, she delighted in the flavor of a by-gone era. If you’ve ever had fresh cherry pie, you know there’s no comparison to the kind baked with canned cherries.
One day that following winter I came home to find the cherry tree pruned, though I hadn’t hired anybody to do the trimming. To my astonishment, one of my neighbors told me that a crew from the City Forester’s office had happened by and done the work. The gratis trimming left a higher canopy above the public sidewalk and helped the tree achieve its balance and grow upright again.

The following spring, I began snipping long twigs from the cherry tree for my Easter tree--my mother’s tradition I took up in her memory. If I cut the branches around Ash Wednesday and bring them inside, the fresh and lacy white cherry blossoms open to add new life to the Easter tree just in time for the celebration of the resurrection.
The cherry had more misadventures with winter. More blizzards broke off more limbs. The tree surgeons did their best, but the tree always looked deformed. Still, it blossomed and bore fruit and provided the beautiful, burgundy branches for the egg tree.
But this is my favorite harvest from the cherry tree: One spring, I was gardening in an herb bed near the cherry tree when some neighbors from the next block passed by walking their dog. These neighbors were flamboyant, openly homosexual men. To be honest, I probably judged them at first and maybe wanted to shun them, suspecting from their gaunt appearance that they could be HIV positive.
Our dogs sniffed one another. We said our polite hellos. Then they commented on the lovely blossoms on the tree, seeming genuinely excited by the white flowers. And thinking they'd never take me up on my offer, I invited them to come back to pick cherries when they ripened.
In July, they did just that, thanking me profusely as they filled plastic containers with cheery red cherries. I remember feeling gratified to share the cherries--after all, it wasn’t really my tree, a bird just happened to plant it years ago. And even the City Forester’s office had chipped in to see the tree through. The cherry tree helped me to understand the difference between stewardship and ownership.

ONE GOOD DEED DESERVES ANOTHER

The following winter, I had been suffering from a bout of influenza. Bed-ridden, I had eaten little or nothing for two days. I live alone, and on the evening of the third day, when I started feeling well enough to eat, I, like Old Mother Hubbard, went to my cupboards and found them bare. The refrigerator was empty, too. I was hungry, but still too sick to drive to the grocery store.
Just then, my doorbell rang. I hesitated to answer, still in my pajamas and aware that I must look a fright from two days of illness. When I peeked out my door, I saw one of the gay neighbor men. He wore oven mitts and held a steaming glass casserole dish. His eyes lit up when I opened the door, then his mouth dropped.
“You’re sick,” he said. “I’m sorry. Well, this is cherry cobbler just out of the oven. I made it with the cherries we picked from your tree. It would be nice with some vanilla ice cream,” he said. “Or just enjoy it plain.”
I stood speechless. I took the casserole dish from him and felt in my hands its weight and its warmth and its love.
I thanked him. He thanked me again, as he let himself out the porch gate, for letting him pick the cherries. I didn’t have any vanilla ice cream on hand, but that cherry cobbler was one of the sweetest, most nourishing, satisfying comfort foods ever I have eaten. YUM!

Posted by colleenwordsmith at 9:27 PM