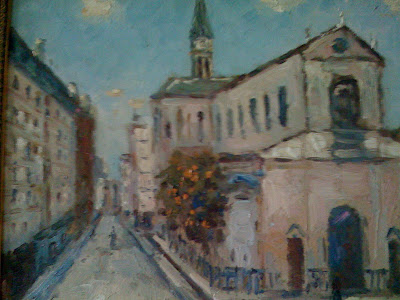 The painting above hangs in my studio, ethereal against the midnight blue wall. I'm sorry I do not know the artist, nor is it signed.
"Not all soul music comes from the church," Bono wrote in his new column.

SUNDAY'S NY TIMES INTRODUCED A NEW COLUMN BY BONO, lead singer of the Irish band U2, and a philanthropist. I knew Bono could rock, and I suspected he had soul, yet who knew he writes so well? His message--if not his style--might surprise you. It's not a fluke; I read one other piece by him of equal calibre. Read on. Does not sound like a ghostwriter.

I AM in Midtown Manhattan, where drivers still play their car horns as if they were musical instruments and shouting in restaurants is sport. 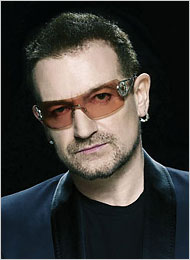 I am a long way from the warm breeze of voices I heard a week ago on Easter Sunday.

“Glorify your name,” the island women sang, as they swayed in a cut sandstone church. I was overwhelmed by a riot of color, an emotional swell that carried me to sea.

Christianity, it turns out, has a rhythm — and it crescendos this time of year. The rumba of Carnival gives way to the slow march of Lent, then to the staccato hymnals of the Easter parade. From revelry to reverie. After 40 days in the desert, sort of ...

Carnival — rock stars are good at that.

“Carne” is flesh; “Carne-val,” its goodbye party. I’ve been to many. Brazilians say they’ve done it longest; they certainly do it best. You can’t help but contract the fever. You’ve got no choice but to join the ravers as they swell up the streets bursting like the banks of a river in a flood of fun set to rhythm. This is a Joy that cannot be conjured. This is life force. This is the heart full and spilling over with gratitude. The choice is yours ...

It’s Lent I’ve always had issues with. I gave it up ... self-denial is where I come a cropper. My idea of discipline is simple — hard work — but of course that’s another indulgence.

Then comes the dying and the living that is Easter.

It’s a transcendent moment for me — a rebirth I always seem to need. Never more so than a few years ago, when my father died. I recall the embarrassment and relief of hot tears as I knelt in a chapel in a village in France and repented my prodigal nature — repented for fighting my father for so many years and wasting so many opportunities to know him better. I remember the feeling of “a peace that passes understanding” as a load lifted. Of all the Christian festivals, it is the Easter parade that demands the most faith — pushing you past reverence for creation, through bewilderment at the idea of a virgin birth, and into the far-fetched and far-reaching idea that death is not the end. The cross as crossroads. Whatever your religious or nonreligious views, the chance to begin again is a compelling idea.

Last Sunday, the choirmaster was jumping out of his skin ... stormy then still, playful then tender, on the most upright of pianos and melodies. He sang his invocations in a beautiful oaken tenor with a freckle-faced boy at his side playing conga and tambourine as if it was a full drum kit. The parish sang to the rafters songs of praise to a God that apparently surrendered His voice to ours.

I come to lowly church halls and lofty cathedrals for what purpose? I search the Scriptures to what end? To check my head? My heart? No, my soul. For me these meditations are like a plumb line dropped by a master builder — to see if the walls are straight or crooked. I check my emotional life with music, my intellectual life with writing, but religion is where I soul-search.

The preacher said, “What good does it profit a man if he gains the whole world and loses his soul?” Hearing this, every one of the pilgrims gathered in the room asked, “Is it me, Lord?” In America, in Europe, people are asking, “Is it us?”

Carnival is over. Commerce has been overheating markets and climates ... the sooty skies of the industrial revolution have changed scale and location, but now melt ice caps and make the seas boil in the time of technological revolution. Capitalism is on trial; globalization is, once again, in the dock. We used to say that all we wanted for the rest of the world was what we had for ourselves. Then we found out that if every living soul on the planet had a fridge and a house and an S.U.V., we would choke on our own exhaust.

Lent is upon us whether we asked for it or not. And with it, we hope, comes a chance at redemption. But redemption is not just a spiritual term, it’s an economic concept. At the turn of the millennium, the debt cancellation campaign, inspired by the Jewish concept of Jubilee, aimed to give the poorest countries a fresh start. Thirty-four million more children in Africa are now in school in large part because their governments used money freed up by debt relief. This redemption was not an end to economic slavery, but it was a more hopeful beginning for many. And to the many, not the lucky few, is surely where any soul-searching must lead us.

A few weeks ago I was in Washington when news arrived of proposed cuts to the president’s aid budget. People said that it was going to be hard to fulfill promises to those who live in dire circumstances such a long way away when there is so much hardship in the United States. And there is.

But I read recently that Americans are taking up public service in greater numbers because they are short on money to give. And, following a successful bipartisan Senate vote, word is that Congress will restore the money that had been cut from the aid budget — a refusal to abandon those who would pay such a high price for a crisis not of their making. In the roughest of times, people show who they are.

So much of the discussion today is about value, not values. Aid well spent can be an example of both, values and value for money. Providing AIDS medication to just under four million people, putting in place modest measures to improve maternal health, eradicating killer pests like malaria and rotoviruses — all these provide a leg up on the climb to self-sufficiency, all these can help us make friends in a world quick to enmity. It’s not alms, it’s investment. It’s not charity, it’s justice.

Strangely, as we file out of the small stone church into the cruel sun, I think of Warren Buffett and Bill Gates, whose now combined fortune is dedicated to the fight against extreme poverty. Agnostics both, I believe. I think of Nelson Mandela, who has spent his life upholding the rights of others. A spiritual man — no doubt. Religious? I’m told he would not describe himself that way.

Not all soul music comes from the church.

Bono, the lead singer of the band U2 and a co-founder of the advocacy group ONE, is a contributing columnist for The Times.

Posted by colleenwordsmith at 7:05 AM