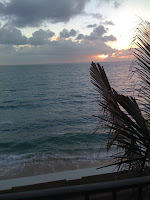 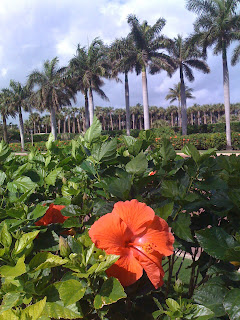 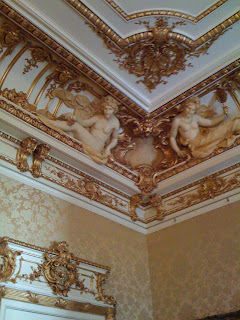 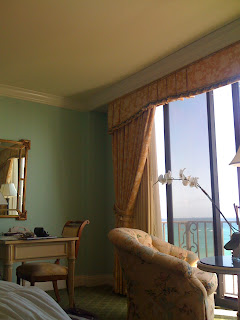 If you’ve been to Palm Beach, you know that saying it's uber swanky is an understatement.

Last Spring, while in Palm Beach, I had the good fortune of staying at The Breakers, an opulent hotel.

Like a grand museum, every corner held lavish surprise.

This room at The Breakers ranks as maybe my favorite hotel room ever. The mezzanine balcony overlooked the Atlantic--just outside, just below, sweeping and churning, a lullaby to the eye, as well as the ear. The walls of the room had been painted the same color as the ocean. The scent of the sea penetrated the bed linens. Every time I returned to the room, I pretended it was my apartment. Dream on…

Along a beautiful stretch of beach, The Breakers has a series of swimming pools. For me, the best, at the very end of the line, was a relaxation pool. The deck was kept quiet and free of cell phones, a perfectly contemplative place. I remember the wind blew almost ceaselessly, turning the pages of The New Yorker for me.

Walking the neighborhood surrounding the resort, I admired the landscaping. I read recently that the island’s palms originally grew from coconuts relinquished from the hold of a ship wrecked during a storm. Triumphantly tropical, the enviable gardens resembled mini Edens. I knew Palm Beach was someplace very, very special when I learned that Jimmy Buffett—an arbiter of island paradise—keeps a home there.

T-shirts, it turns out, were the least of their worries. Palm Beach, we now know, was the epicenter of Bernie Madoff’s earthquake of greed.

(Has anybody else thought it almost too right-on to be true that this thief’s name looks like a combination of “mad” and “off,” but actually is pronounced “MADE off,” as in he made off with people’s money? Nobody would buy that in fiction!)

In yesterday’s Sunday Business section of The New York Times, David Segal reported many more quirky aspects of Palm Beach, like the fact that “For Sale” signs must be printed in black and white and be no larger than a CD case. (A lot of houses are on the market now, ranging from $700,000 to $72.5 million.)

“We’re getting fewer requests for lobster and caviar and a lot more for mashed potatoes and macaroni and cheese,” said a caterer quoted by Segal.

While in Palm Beach last Spring, six of us enjoyed a fabulous meal in a terrific, old guard restaurant called Ta-boo, founded in 1941.

We toured the Flagler House, built by the Standard Oil founder who developed the island as a retreat for his family and his wealthy friends. Outlandish in scale and elegant detail, it’s a reminder of the chasms of capitalism: haves, have-nots. Now, many haves in Palm Beach have a lot less.

Walking along Worth Avenue last year, I understood quickly that one needed a substantial net worth to shop there. In his story, Segal quoted a retailer from a haberdashery unabashedly named Trillion who reveals that gentlemen no longer automatically upgrade their wardrobes: “Eight blue blazers is enough.”

Worth Avenue shops are suffering, even closing. One Palm Beach resident bemoaned the fact that a psychic is moving into a space vacated by an upscale boutique. If anybody knows anything about what will happen with the economy, my money is on the psychic.

Meanwhile, Segal’s story is a fascinating, though sad, read under the headline “Poor in Palm Beach. It’s Relative.”

Posted by colleenwordsmith at 7:58 AM