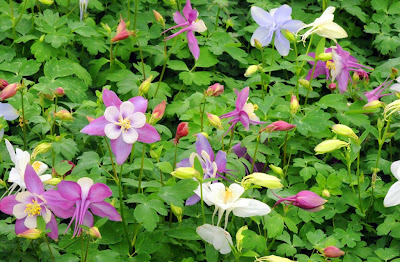 Photo by James Baca -- Columbines are Colorado's state flower. In Christian iconography, they symbolize the Holy Spirit because the flowers resemble little doves.

This piece was published in a slightly shorter version 9 years ago, at the time of the one-year anniversary of the Columbine High School massacre.

So that the living won’t forget, and so the dead won’t be forgotten: That’s the intent of memorials.
A year ago, as people paid their respects at the makeshift memorial near Columbine High School, a reverent hush hovered, broken from time to time by the sound of sighs and sniffles, the sound of shoulder-shaking weeping. Occasionally, a musician added a song, a trumpet rendition of Amazing Grace, for example. A tree filled with wind chimes jingled and keened.
Like “The Fence” in Oklahoma City, Clement Park was the repository of shock and shame, sympathy and grief, righteousness and outrage. And the park was the repository of mementos. Scores of silvery mylar balloons glinted in the sun, some shaped like butterflies in flight among clusters of blue and white balloons, representative of Columbine’s school colors. In the inclement conditions--snow had fallen like a funeral pall--most balloons were flagging, not unlike the spirits of those who shuffled over the straw underfoot, ambling through the acres of shrines that offered a certain buoyancy, a certain deflation.

Candles burned and burned out

The bucolic setting with open space and foothills and a lake lent itself to
the sense of the shrine, the pilgrimage. Pinwheels churned the air. Candles burned and burned out.
The memorial drew people in business attire and bib overalls, infants in strollers, toddlers clutching daffodils in one hand, their mother’s hand in the other, senior citizens making their way with canes or the arm of a companion, people with their leashed dogs. An elementary school girl held in her small hand a package of forget-me-not seeds. A teen with tattoos and blue toenail polish, earrings and toe rings, placed a poster signed by a group of students. A couple leaned against one another; their infant slept, strapped to the father’s chest. Others in automobiles snapped photos from their cars as they passed by. A mother led her three young blond children through the maze of amazing expression, and they asked her what would happen to all of these balloons and bears and banners and bouquets. She replied, “I don’t know.”
Some people knelt, crossed themselves. Others stood, hands gathered behind their backs. Somebody blew delicate, iridescent soap bubbles that pirouetted through the memorial.

An ocean of flowers

A woman walked slowly, cradling an armful of white carnations individually wrapped, white plastic rosaries dangling from the bundle. She added her flowers to the ocean of flowers, the natural expression of so many emotions. The fragrance of fresh flowers overwhelmed, the perfume of thousands upon thousands of blooms piled on the ground, woven into chain link fencing or lattice, leaned against candles or crosses.
Everywhere were expensive, elaborate, professionally arranged flowers alongside the more humble bouquets: a few tulips picked from the garden, the bottoms of their stems wrapped in aluminum foil; pansies in terra cotta pots; bundles of yellow daffodils, clutches of red roses, single stems of calla lilies. Many of the flowers wilted in the sun or rotted in the snow and rain, yet they held their sentiments. The flowers testified to sorrow and sanctity. With their beauty, they softened the ugliness of what had happened.

The memorial displayed not a local sorrow, but a global grief, as evidenced by a wreath from school kids in Kosovo; flowers from Maui, Hawaii; a letter from a student in Forster, Australia.
Throughout the memorial, dangling from rope strung from post to post were countless signs and posters, letters, messages written on denim jeans and T-shirts, embroidered on handmade quilts, scrawled with magic markers on bed sheets. A middle-aged man earnestly went about drilling more lattice to mount, providing still more room for expression.
The messages were computer generated or hand-lettered, painted on boards or silkscreened on weatherproof banners. Some sentiments were influenced by personal philosophy, song lyrics or politics, but most had a religious theme: “Put prayer back in school and God back in our lives.” “Pray for peace.” “Let us pray, then, not for patience and tolerance--but for the courage and resolve to drive this evil from our community.” “The Lord made a hard decision today. He brought some of our children home so we might open our eyes.” “Jesus wept.”
A preschooler’s poster depicted a line of crudely drawn and colored angels, their heads formed from cut- out newspaper photos--the by-then familiar faces of the dead. Another poster proclaimed an apocryphal millennial prophesy comparing the 12 students and one teacher slain to the 12 apostles and Jesus Christ.
Somebody had placed a concrete statue of the Blessed Virgin Mary; dangling rosaries almost hid her praying hands. An oil painting on velvet of Jesus praying in the Garden of Gethsemane leaned against a tree. Everywhere, there were crosses: wooden crosses labeled with the names of the slain and the killers, crosses formed of pine logs, or flowers, crosses formed of teddy bears or gutter pipes or pipe cleaners.

At a section of the memorial devoted to the late Dave Sanders, the heroic teacher and coach killed in the massacre, a former athlete had left a pair of running shoes dangling from a tree limb with a note that read, in part, “You taught me to be a man.” The softball team and the “bleacher bums” were represented in posters and an enormous softball cut from Styrofoam. At the softball diamond, somebody had left a sign labeling the place “Sanders Field.”
Along with the fresh flowers, the memorial was strewn with strands of paper flowers, columbines crafted of construction paper. There are plastic flowers and silk flowers and simply, sweetly drawn flowers from small children. Near the tennis courts, more of the same: more flowers, more crosses and condolences. And more obscure things, even a bottle of maple syrup.

A place of pilgrimage

A plastic-wrapped watercolor depicts columbines growing before mountain peaks. The painting is lettered “Stand tall.” Even before arriving at Clement Park, the prevailing sentiment was evident in wreaths hanging at the entrances to communities and cobalt blue satin ribbons tied to trees flutter in the neighborhoods surrounding Columbine High School.
For thousands of mourners, Clement Park has become a place of pilgrimage and prayer, a shrine of sympathy. At the park, cars fill the parking lot, the same lot where Rachel Scott and John Tomlin left their cars parked April 20, the day they were murdered at school. An awning protects Scott’s red Acura Legend and layers of flowers and letters, stuffed animals and photographs obliterate her car.
The same is true of John Tomlin’s brown pickup truck, covered by well wishers. A letter jacket with a message penned on a white leather sleeve drapes over the tailgate. A pocket sized version of the New Testament rests on a tire.
The cars are just two of a series of makeshift shrines throughout Clement Park, where a staggering number of mementos, sacred and the secular,
Yet another poster, signed by the father of slain student Daniel Mauser, read “I want the world to remember my son and all who suffered here.”
Those who suffered there were celebrated there, pondered, prayed for. The memorial was not so much maudlin or morbid or morose as it was comforting, peaceful, healing.

At the top of the knoll, originally one cross stood, its arms draped with necklaces and ribbons, piles of flowers at its foot and a shallow basket holding red and yellow apples. Then 15 wooden crosses were erected. Then they were torn down. A controversy ensued, not so much about the separation of church and state but about the separation of the killers from the victims.
On the muddy hillside, a heart woven of flowers took shape. Through drizzling rain, visitors made their way up the well worn dirt path to the vantage point overlooking Columbine High School. At the end of the building, the library windows were boarded up.
Atop the knoll, a man, hands shaking, voice breaking, said, “I know we all came out here to pray privately for these children. But can we maybe do so corporately? Can we make a circle hand-in-hand and pray together?”
And we did. We formed a circle. Heads bowed, we were strangers acquainted through tragedy. We were people wanting to forget, yet willing to remember.

Posted by colleenwordsmith at 7:55 AM