IN MEMORIAM: My Dad on His Birthday 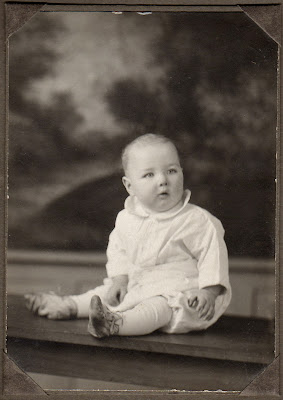 I wrote this column for publication on Father’s Day in the year 2000; and I gave a copy to my dad as a Father’s Day gift. He liked the piece, of course; and he told me that we could use it as his eulogy. Little did I know that just four months later, we would do just that.


I have my father’s blue Irish eyes, though we see the world from radically different points of view. I’m a card-carrying romantic; he’s utterly pragmatic. I read fiction and poetry; he reads newspapers. He eats meat and potatoes and won’t touch the ethnic fare I prefer. I procrastinate, but my dad never lets the grass grow under his feet.

My dad and I do share a sense of humor, an insatiable curiosity and a quirky creativity. For example, when I was a girl, my dad took me to our vegetable garden. He gave me a bottle and he placed the bottle over a tiny cucumber, tucking the vine down the bottle’s neck. We let the cucumber grow inside the bottle, filling the glass, until we cut the vine; and I had a prop giving the illusion I had magically fit a large cucumber through the narrow neck of the bottle.

As the eldest of an Iowa farm family with seven kids and the father of six of his own, my dad has always been involved more in responsibility than recreation. He never golfed or played tennis, fished or bowled. My mother told of my dad coming home during lunch and forgoing eating so he could play with us kids. He endured endless games of “Go Fish.” At Christmas, Santa always brought board games, and before playing, Dad made us listen as he read aloud all the rules. When you’re raising six kids, rules are important!

My father drove our family all around the United States, Canada and even Mexico in our Winnebago on long summer vacations, instilling in us his sense of wanderlust. I’ve since realized those trips meant a lot of work for my dad. But he delighted in our delight. And he wanted us to see the White House, the Redwoods, the Grand Canyon, the Alaskan Highway, the Empire State Building, the oceans, and the mountains of Colorado, where he would eventually reestablish his family.

In Colorado, I watched my dad bury a 32-year-old son--my brother--and his wife of 46 years--my mother. I revere my father as a man with strength enough to weather profound grief and courage enough to go on living. “Long days and lonely nights” is how he described time since my mother died.

He could fix almost anything

In those years, however, I came to know my father anew. When my mother was alive, my siblings and I always went to her first with our concerns. In troubled times, she served as a buffer between us and Dad, who was known, on occasion, to get his Irish up. My mother’s energetic presence dominated many family scenes while Dad remained quietly in the background, “looking the place over,” as he says, tinkering, figuring, fixing.

That was the thing about my dad: He could, seemingly, fix anything, be it my yard light, my leaking bathtub faucet, my front door screen. For a single woman with a 79-year-old house, having a handy father was nothing short of a godsend. In recent years, my dad and I tackled some projects together, too. We built a cedar fence around my backyard. And just outside the fence, we added a raised, stone flower bed.

It has occurred to me that part of the reason I garden with gusto is that I got an early start as a toddler digging in the sandbox my dad made for us from an old tractor tire. He made us swings and skateboards, too, patiently patched bicycle tires, mended softball gloves, untangled kite strings and removed splinters as the caretaker of our childhood ways.

Once I had grown up and my father had grown old, we both had mellowed, forgiven each other our trespasses. While I was still in high school and college, my dad's typical line of advice was “Keep your nose to the grindstone and your shoulder to the wheel.” In later years, he told me, “Don’t work too hard! Get some rest!”

In one of many family photo albums is an old snapshot in which I’m about 3, and my father is roughly the age I am now. I’m standing at my dad’s side. I am tiny. He is tall. One of his hands drapes around my face and under my chin as if my head rests in the palm of his hand. My face beams precious happiness, the innocent look of one provided for, assured of caretaking, protection, affection, love.

It’s that sort of comfort, that gentle strength delivered from my earthly father, for which I thank the heavenly father each Father’s Day.

Posted by colleenwordsmith at 12:59 PM