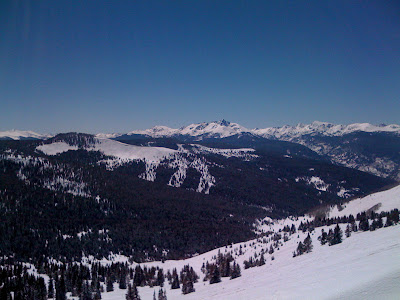 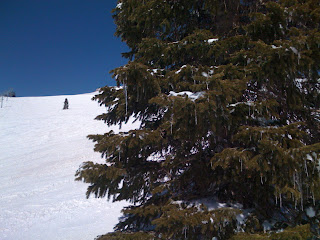 ON TOP OF THE WORLD:
Above, the view from atop Bolshoi Ballet at the edge of Siberia Bowl, elevation 11,455 feet.

At left, a tree from the Whimsical Icicle Forest--my name for the special effects on the mountain yesterday.


Spring’s melt-freeze cycle decorated the evergreens on Vail with zillions of icicles sparkling in yesterday’s sunshine. Our skis were freshly waxed. We took a few warm-up runs on Lionshead, one far end of the front side of Vail’s expansive terrain. The day before had ended in sincere snow, and the mountain had a few inches of fresh powder. Under a sapphire sky, the mountain seemed enchanted; and Monday meant smaller crowds. We had a plan to make our way all the way to Outer Mongolia, the other far end of the mountain, on the back side of the mountain, where the snow lies as Mother Nature dealt it. In other words, no runs are groomed.

In between, we skied some freshly groomed slopes; and I was getting my groove on in the corduroy—the lingo for the wide wales the Snowcats leave--I was thinking about how I love leaving fresh tracks. We all like to leave our mark, which is why silversmiths have hallmarks, and journalists have bylines, and why, I suppose, kids commit graffiti crimes, tagging blank surfaces.

The day before, skiing, I had an opposite thought occur. My head was full of details. With every turn I took, I noticed all the busy thinking falling away. The image that came to mind was of a chalkboard covered with a chemistry equation, but each turn on the mountain had the effect of a felt eraser wiping down the slate.

SOMETHING OF A SOJOURN

Getting to Outer Mongolia requires something of a sojourn. You cannot get there by chairlift alone. Once at the bowl, skiers and riders must take a poma lift up. If you’ve never experienced a poma, picture a platter on a retractable cord. Then picture straddling the platter and hanging on to a bar—and ski poles—while being towed up the hill. Sort of like the T-bar.

The views forced us to pause. The bowl below was not all tracked out, and Vail had gotten dumped on the week before—40-some inches in three days. There was lots of snow—deep, heavy, snowman-making snow.

Earlier in the season, while struggling in the deep powder, we decided to book a lesson. My Vail Ski & Ride Instructor, Richard, hails from Austria. So did my mother. Skiing powder requires a different skill set. “You cannot carve in the powder,” Richard said. Richard helped so much that by the end of the lesson, we had sailed down a black run deep with snow, and the overwhelming emotion was not fear, but joy. Another thing Richard taught me: “Don’t forget to smile and enjoy the scenery on the way down!”

So when we started down this amazing snowfield, and I was actually making turns in the snow and taking in some of the spectacular views, I got excited. “I’m doing it!” I thought. “I’m turning! I'm linking turns in this deep and heavy snow! Me! I have to remember to tell Richard that I made tracks in …”

BLAM. FACE PLANT. All I could do was laugh. And struggle to stand up again. I tried to plant my ski pole to stabilize myself, but it disappeared in the snow, buried all the way except for about an inch of the handle. I wore myself out trying to upright myself, but finally standing on my skis again, I looked up the hill at the proud turns I’d made in the untrammeled snow. And I saw that I’d left my mark, all right: a dramatic sitzmark where I’d landed at the end of my wide ribbon candy turns. One must never get too full of oneself while on skis.

We skied down Silk Road, rode the poma again, skied down Outer Mongolia Bowl, and I fell again. I struggled, but managed to get back on my skis again. I laughed like a kid with a new sled, playing in the snow. I won’t get any style points for my turns in heavy snow anytime soon, but lightheartedness counts for something, too.

We were among the last people on the slopes, skiing down with the mountain workers getting off after their shifts minding the chairlifts and pomas. And on the drive back to Denver, the snow held the light from an almost-full moon that was leaving its mark, ever so subtly, yet surely.
Posted by colleenwordsmith at 1:37 PM