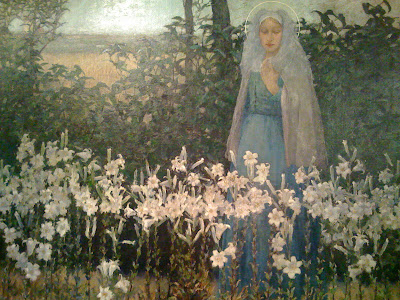 Lilies galore adorn "The Annunciation" by George Hitchcock, 1887
I took this photo last summer at the Chicago Institute of Art.
This frame shows most of the beautiful painting on a large, horizontal canvas.

All those lilies in the grocery stores and the big box stores and the garden centers? They're an old tradition. You just might wind up giving one a home once you're aware of all the "in-the-beauty-of-the-lily" lore.
Plus, after the holiday, you can add Easter lilies to your landscape.
(See next post for easy details.)

Lilies preside as the flowers sculpted on baptismal founts, the blooms gracing wedding bouquets and funeral sprays; but above all, lilies are the flowers of Easter. The sanctuaries Christian churches worldwide will sigh with the scent of lilies this weekend, their white blossoms bowed prayerfully in celebration of Easter Sunday.

No other flower bears such abundant religious significance as the lily, which held meaning for both pagan and Christian.
The first known decorative use of lily was found on a Cretan vase circa 2500-1500 BC. Pagans associated the lily with love, marriage and motherhood. Roman mythology links lilies to Juno, queen of the gods. One myth holds that while Juno nursed her son Hercules, her milk dripped from the sky. The portion that stayed in the sky formed the stars of the Milky Way, and the remainder fell to the earth, creating milky white lilies.
Christians long have used the lily as the emblem of the Virgin Mary, evocative of her beauty and purity. One source claims the lily became the Virgin Mary’s symbol because its scent, unlike that of most flowers, cannot be extracted as essential oil. Renaissance painters regularly depicted Mary with an unsullied lily, and eventually the flower was commonly known as the Madonna lily. But the species appears different from what we think of today as the Easter lily.
Other Christian lore tells of pale and pure Easter lilies sprouting up where Christ’s sweat fell during his crucifixion.
Catholic art and iconography also associates the lily with St. Anthony of Padua and St. Catherine of Siena. Kings and emperors later used the lily to symbolize nobility and devotion to the Blessed Mother.

Lilies long in vogue as church decorations were censored by the puritan Victorians, who removed the flowers’ pistils and stamens, viewing them as overt sexual symbols that might stimulate impure thoughts in the congregation.

Known by the botanical name Lilium longiforum, Easter lilies were native to Ryukyu Islands of southern Japan, as well as the island of Okinawa. Other varieties of lilies have their roots in remote antiquity: ancient Egypt, Syria and China.
In 1819, Easter lilies were introduced in England. In Bermuda in 1853, commercial production of bulbs began. Bermuda had established such a stronghold in the cultivation that the species became known as Bermuda lily. In 1898, however, infestation and virus obliterated the Bermuda lily industry.
About the same time, lily bulb production began in the southern United States. Japan still produced the lion’s share of bulbs, but during World War II, the U.S. eliminated Easter lily bulb trade with Japan and centered production in the Pacific northwest.
The millions of lilies that will adorn altars and homes this Eastertide likely were forced from bulbs shipped from Oregon or Washington, where the environment suits the plant. The most common Easter lily species is Nellie White.

Many Easter lilies--like Christmas poinsettias--will eventually wind up in the trash. The nature of lilies is such that the plant’s culture proves difficult to provide for indoors. But gardeners can give a good home to Easter lilies, and the plants will provide beauty for years to come without much horticultural fuss.
Given their elegant form and fragrance, lilies intimidate some with their seemingly capricious nature. In fact, lilies grow relatively readily in Colorado.
The root runs need shade from the sun’s intense rays. Mulch helps keep roots cool. Surprisingly hardy, lilies mingling in bamboo gardens, among ferns or other plantings flourish. Planting on a slope allows the drainage lilies desire.
Blooming lilies perform symphonies of six. Six petal-like segments form the bloom. Inside the bloom are 6 stamens and 6 rows of seeds.
The genus lilium includes European and American, Asiatic and Oriental
bulbs, but not day lilies, water lilies, canna lilies or lily-of-the-valley. In fact, the Easter lily is more closely related to the tulip and to asparagus than to these other so-called lilies.
A list of true lilies includes more than 1,200 species that vary in size, form and color. Easter lilies range in color from pure white to greenish-white, with saffron-colored stamens thrust out in contrast.

In lily lexicon, “lily-white” usually means exclusive of non-white people. “Lily-livered” is a Shakespearean insult, hurled at the cowardly. The phrase “to gild the lily” also stems from Shakespeare, though loosely paraphrased. And in a sonnet, Shakespeare wrote, “Lilies that fester smell far worse than weeds.”
In the beauty of the Easter lilies’ showy blossoms, white as the season’s last snow, is the trumpeting of spring’s resurrection.

Posted by colleenwordsmith at 10:54 AM