THE ARTS: Two Flicks on the Fourth Estate 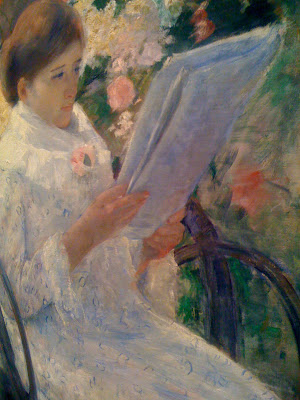 I shot this detail of Renoir's painting, part of the collection at Chicago Institute of Art.
Will newspapers go the way of camera film? If you care about the fourth estate, support your local newspapers. 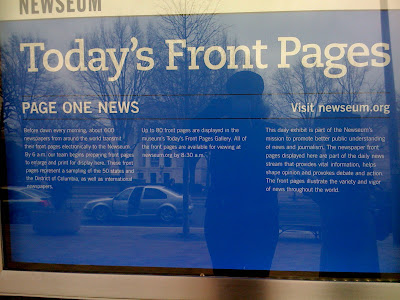 NEWSEUM IN WASHINGTON, D.C.
"Before dawn every morning, about 600 newspapers from around the world transmit their front pages electronically to the Newseum." Regretably, I never made it inside the Newseum, but my friend Andrea and I--inadvertently reflected in the sign--found the front pages displayed in front of the building fascinating. Log on to newseum.org for more information.
This weekend, I saw both "The Soloist" and "State of Play," two solid journalism movies. "The Soloist" gets high marks for being based on a true story, for pointing out the sad fact that greater Los Angeles has 90,000 homeless people, and for the scene depicting synesthesia. (Seeing colors while hearing music is one example of synesthesia.)
"State of Play" won me over with the journalists' witty dialogue that rang true, and for shedding light on the newspaper world's problems. Some good, snarky lines about blogs vs newspapers. Amazing to see the presses running and to wonder whether they will go the way of the telegraph before too long.
One recent horror story in the ongoing saga of newspapers: Some reporters in Baltimore were on assignment covering a baseball game when they got a phone call informing them that they were being laid off. Now that's crass. I suppose they still had to file their stories.
Coincidentally, in both movies, the leading men--journalists for daily newspapers--drove Saabs.

Posted by colleenwordsmith at 10:20 PM