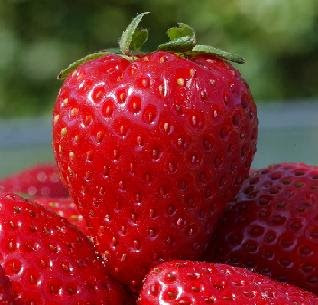 Outside, Old Man Winter makes a last March stand. Chilly and overcast, as another snow melts, the drips in my bungalow’s metal gutters sound like incessant snare drumming.

Inside, it's a good day to turn on the oven, so I'm roasting strawberries.

When I mention this preparation to people, they seem aghast. So was I. I first read about this in Martha Stewart Living way back—long before Martha did her stretch in jail.

NOT HOME GROWN, THO' I DID MAKE AN ATTEMPT

Pssssst: This is not politically correct cooking. It’s 30 March in Colorado, so these berries did not grow locally, sorry to say. Last year, I tried growing strawberries in a hanging container. I bought a healthy plant from a local, organic grower. I potted it up, tended it, treated it to compost courtesy of the red wiggler worms in the bins. I watered and watched as the runners grew and formed a few dainty, white flowers. And I harvested exactly five strawberries all season.

The strawberries were tiny, about the size of my small fingernail. But these petite fruits tasted at least 100 times better than the berries I buy regularly in the grocery store. These miniature strawberries packed the biggest whallop I’ve tasted in years.

THE TASTE OF LOVE ITSELF

As I kid, I savored the flavor of sun-ripened strawberries. I remember going as a wee one to pick the heart-shaped fruits at Furleigh Fruit & Vegetable Farms in Clear Lake, Iowa. Eating sun-warmed berries while picking was the best part—that is, until the berries appeared on our dessert plates in my mother’s strawberry or strawberry-rhubarb pies that to my little palette tasted of love itself. My mother also made delicious strawberry jam, and a couple of my sisters still do, but I've never tried.

On assignment each year for the last 11 in Southern California, I’ve many times passed the wide open strawberry fields in various seasons. Making a visit with one’s family to pick strawberries as a kid was something of an adventure with a treat. However, stooping to pick berries day after day in the hot sun is horrendously hard work—especially given that the labor is not only stooped, therefore back-breaking, but also hard on the hands. I once interviewed a school principal in Oxnard, California, who told me that when field workers came to pay their children’s tuition, she noticed their hands damaged from the acids in the strawberries and the chemicals on the berries.

Strawberries have complex flavors—but when picked too early and shipped long distances, they arrive woody and have little flavor at all. Fresh produce tends to begin the process of breaking down as soon as picked. Some fruits will ripen on the kitchen counter, but not with strawberries. If serving for dessert, I generally coax nuances out of them by macerating them in a drizzle of Grand Marnier or Amaretto. Sometimes I sprinkle sliced berries with balsamic vinegar from Modena.

Or I roast them. Roasting has a surprising way of plumping fruits in their juices and enhancing their flavors. I roast plums, too, and can barely eat them raw anymore. The fruit is all too often not ripe, hard-fleshed, and tasteless.

MORE READING: The 19 August 2002 issue of The New Yorker published a fascinating profile titled “The Fruit Detective” about a stone-fruit fanatic who searches the lands far and wide to find flavorful peaches, plums, apricots, and the like. I Googled the title, and it came right up.

But roast strawberries, and you’ve got a mouthful of flavor. I vary from roasting berries with a bit of butter and a bit of honey, or a spill of liquor. Today, I happened to have on hand some Devon butter, obviously not local.

To enjoy roasted strawberries, allow them to cool a bit, but do try them warm. On a snowy day like today, a warm, roasted strawberry seems a bit of the divine. I had
The good fortune to have some French vanilla goat yogurt. Eaten with the berries rendered something sweet and slightly sour, creamy and fruity—not unlike cheesecake. Yum!

P.S. Best to buy organic strawberries because this fruit ranks high among produce most laden with toxic pesticides. See the post AND ECONOMIC JUSTICE FOR ALL: A Primer on Produce and Pesticides. Another odd fact: I read somewhere that strawberries had been genetically engineered with salmon to increase their susceptibility to cold. Yuck!

Posted by colleenwordsmith at 12:55 PM