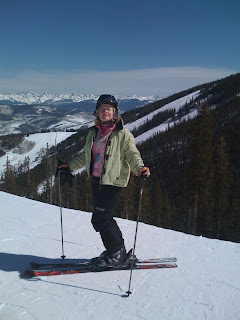 Just because the Vernal Equinox has come and gone doesn’t mean we’ve heard the last from Old Man Winter. Over the weekend, skiing Vail, a storm kicked up. Saturday started out a bluebird day without a cloud in the sky. Skiers and riders alike searched for the promise of snow. The forecast called for 8 to 10 inches. We crossed our fingers, if not our ski tips.

Yesterday, the weatherman delivered. Snow fell all day. We skied the storm, catching the last rides on several chairlifts. We ended up downloading (riding a chair down rather than up) at the very end, due to no visibility. Since Vail Pass was closed, we settled down for a leisurely supper, then passed a few hours—thanks to the hospitality of Holiday Inn Apex—in comfy leather chairs near a large fireplace.

On the treacherous drive home, we reviewed the day’s runs and spoke of snow.


The word “winter” derives from the Gothic “wintrus” and, probably, the Old English “waeter” or water. In Colorado, winter water tends to fall in the form of snow. Snow is Colorado’s white gold recreational natural resource, the preferred precipitation for those who “frolic and play the Eskimo way.”

Snowfall transforms the landscape, shrouding drab winter beneath a mantle of gleaming white, muffling sounds and reflecting light. Whether falling silently in gentle flurries or blown horizontally on the howling whiteout winds of a blizzard, whether sublime snow angels or disdained yellow snow, this solid form of precipitation brings to bear an enormous influence on the environment and the creatures that inhabit snow country.

Snow covers as much as 23 percent of the total land surface of Earth. Snow forms when water molecules freeze into crystals. At temperatures above -40 F., snow crystals form around foreign particles: automobile exhaust, industrial smoke, sand or any airborne particulate.

The downy delicacy and intricate, almost infinite patterns make snow as pretty as precipitation gets. A commonly held myth about snow claims that no two snowflakes are alike. However, in 1988, researchers documented two snowflakes with no discernible differences. Scientists also claim that many column snowflakes are much alike due to the simplicity of their prism shapes.

If utter individuality isn’t the signature of a snowflake, no matter. After all, no two pine trees are precisely alike, nor two columbines, nor two stars. Snowflakes demonstrate how one individual--a single, lacy snowflake--contributes to the cumulative effect--snow cover.

The shape of snowflakes and the density of the space between them determine snow conditions. Skiers long for champagne powder, but children out to build a snowman require condensed snow for plasticity.

Ralph Waldo Emerson noted “the frolic architecture of the snow.” An ethereal form ever in flux, snow melts some, freezes again, melts again. Snow can squeak like Styrofoam underfoot one day, and squish into slush the next. Winds can whip snow into drifts and the wavelike ridges known as sastrugi. Along with temperatures and winds, snow’s own weight rearranges itself.

Fresh snow appears white because the crystals reflect the entire spectrum of white light. But when the infamous Cat In the Hat turned the snow pink, Dr. Seuss’ drama wasn’t altogether fantastical. Red, black, blue or green snow--though rare--occurs when snowflakes contain colored fungi. If you've had the good fortune to visit Alaska, you know that some of the snow and ice appears blue. A few winters back, when a major blizzard buried metro Denver and much of the Front Range, I dubbed it the Blue Blizzard of St. Patrick's Day because we had so much snow that it took on a pale blue tint. I notice this color in the High Country, too, sometimes when I plant my ski pole or when snow forms a collar around a tree trunk.

Snow reflects as much as 87 percent of the sunlight shining on its surface, accounting for the need for both sunscreen and sunglasses even in winter. When bright snow reflects ultraviolet rays, unprotected eyes can suffer snow blindness. Colorado’s high altitudes increase the likelihood of the condition.

The nature of snow calls certain people out to play. At the top of Colorado’s long list of snow activities is world class alpine skiing. Colorado’s resorts situate the state at the summit of the nation’s ski industry.

Obviously, the ski season depends on snowfall. Depending on snow, ski resorts can open as early as October and close as late as early August.

When snow accumulations are less than desirable, ski resorts resort to making synthetic snow. First used in 1951 in the Catskill Mountains of New York, snow-making machines atomize water and compressed air to create snow when the temperature falls below freezing. Seeding cold water clouds with silver iodide also induces snowfall with flakes up to four times larger than natural snowflakes. Once, I saw some of these snowflakes in just the right conditions--the slant of light, the temperature--and they looked exactly as if somebody had tossed a handful of colored, metallic confetti shaped like snowflakes. Super magical! I've never noticed it since, but I keep looking, just as I keep looking for lynx.

For all the innocence of an untrammeled quilt of snow, for all it’s glittering beauty and brightness, snow has its dark side, too. Snow can be as deadly and devastating as it is delicate when marshaled in the forces of nature’s snow storms, blizzards, snowslides, avalanches and glaciers. Snow is very dangerous in the back country because of the Rocky Mountains and our climate. Only three other places--the Alps, the Andes and the Himalayas--have more extreme and more variable snow conditions.

Snow can render road conditions treacherous, contributing to fatal automobile crashes or slips into snowbanks that leave drivers stranded. Last year, the son of one of my high school friends lost her 21-year-old son to exposure after his car slid into a ditch in Northern Iowa, and he died of exposure. While skiers and shredders, sleigh riders and sledders welcome deep snowfall, others face the costly and problematic aspects of snow removal. Even residential snow shoveling notoriously brings on heart attacks, not to mention other strained muscles. But in Denver, and along the Front Range this winter, we've not had to worry about that: We've had no winter to speak of this year.

Fortuantely, the High Country has snow. Completing a cycle, as winter melts into spring and solid snow turns to liquid, dangerous--even deadly--flooding can result.

Springtime in the Rockies equals unpredictability, but it seems likely we'll see more snow. March traditionally has been Colorado's snowiest month. In the city, spring has sprung. In the mountains, winter sports enthusiasts-and perhaps students and employees jonesing for a snow day--keep in mind a mantra from a common Christmas carol refrain : “Let it snow, let it snow, let it snow.”
Posted by colleenwordsmith at 2:17 PM