COLORADO COLLEEN: Phoenix of the forest 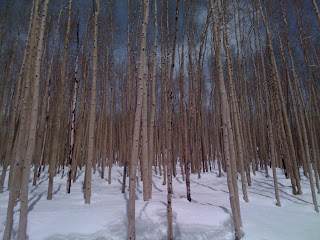 Native Americans called aspens “the tree that whispers to itself.”
It’s no secret that each autumn, when their green foliage changes to gold, aspen trees shout. These popular poplar trees call droves of people to drive to the high country to witness the mountainsides warmed by the wondrous amber aspens. Aspen colors coupled with Colorado’s bright blue skies, evergreens and mountain backdrops create the scenic stuff calendars are made on.
The species populus tremuloides is commonly known as quaking aspen. Some locals call aspen quakies, an allusion to the trees’ shimmering leaves. The quaking comes from a hinge attaching the leaf that allows the leaf stem to flex and flutter in even a slight breeze.
Aspen is one of the most readily identifiable trees, and the aspen leaf’s simple shape--not unlike a heart--is a symbol synonymous with Colorado. Aspens are not exclusive to Colorado. In fact, they’re the most widely distributed tree on the continent.

Identity is a question at the core of a friendly debate concerning aspen. Individual aspens are either female or male. Only the rare aspen forms from a seed. In a process known as suckering, most aspen clone from laterally spreading root suckers with identical DNA. The stems rise out of the ground and appear as individual trees; but one theory holds that they actually are all attached.
In 1992, a 122-acre male aspen clone was discovered in Utah. The clone includes 47,000 trees and weighs about 13 million pounds. University of Colorado biology professor Michael Grant nicknamed the clone Pando, a Latin word meaning “I wander.”
Pando gained notoriety when the CU professor suggested the aspen clone could be the largest living organism on the planet.
The theory that Pando is the largest living organism on the planet relies on the definition of a clone as something with the same DNA, but not necessarily physically connected. Another hypothesis suggests Pando is ancient, up to one million years old—not the wood, itself, but the clone wandering across the mountains.
In North America, Aspen is the deciduous tree with the largest range: from the mountains of Mexico to Alaska, and almost from the Atlantic to the Pacific coast. Colorado’s average aspen stand ranges from 110 to 120 years of age, with a few rare stands approaching 200 years of age. Even more rare are young stands under 40 years old, which occur only where fires have burned or trees have been harvested.

Colorado’s aspen woodlands exist at altitudes between 7,000 and 10,000 feet. Aspen groves tend to form on sites disturbed either by natural activity such as forest fires and avalanches, or human activity such as logging.
Over the eons, aspen have adapted well to dealing with periodic fire disturbances. Pure stands of aspen don’t burn because green, wet grass grows beneath, preventing a natural fire break. And after a wild fire, the aspen acts as the phoenix of the forest, rising from the ashes. Aspens will immediately sprout as the first new growth on the site.

The nature of aspen trees provides biodiversity to the ecosystem. Aspens allow light to flow through branches, supporting a rich and abundant under story of smaller trees, shrubs and grasses.
Aspen habitat is home for a number of cavity nesting birds: Mountain Bluebirds, Red-Naped Sapsuckers, Tree Swallows, House Wrens and owls. Gray Jays and American Robins flock to aspen woodlands, and Cooper’s Hawk and Northern Goshawk can be seen hunting near aspen stands.
Deer and elk eat aspen bark in winter and young trees in summer, sometimes to a devastating impact on aspen groves. Cattle also graze in aspen forests.
Aspen also benefit the environment by consuming less water than conifers, and the trees could be used to promote water retention.
As precious as water is in the West, that’s key.
Posted by colleenwordsmith at 2:36 PM