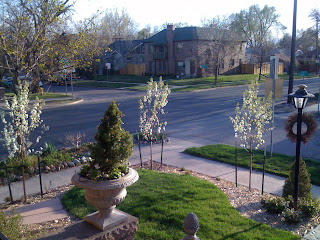 Having a garden is asking for heartache. Due to the unseasonably warm weather, the four miniature snow crabs planted two seasons ago were ahead of schedule with their buds, which now dangle brown—victims of last week’s Front Range blizzard. (The “snow” in their common name obviously refers to their white color, not their ability to weather actual snow.)

At least the blizzard wasn’t a branch-breaker, not uncommon in these parts. My house, situated in a Denver historic district, sits a block off a parkway populated with all old trees. One spring—or was it late autumn?—snow fell so heavy and deep that through the night and into the morning, I could hear large limbs snapping and crashing.

Takes a romantic fool to plant deciduous trees here—especially flowering trees. Fortunately, I have the photo above, taken last year, when snows spared the sweet blossoms during their inaugural Spring in my landscape.

There's still hope for the cherry tree on the side of the porch--which has several times been downed by heavy snows--and the huge, old crab apple tree, which I believe was planted in the backyard around the time the house was built in 1921. Once, many years ago, I woke up and looked out my bedroom windows to see that a heavy snow had fallen. The venerable old tree in full pink bloom was burdened with heavy snow to the point that the branches bowed down to rest on the fence and garage, created a giant, flowered parasol over my secret garden.
Posted by colleenwordsmith at 3:24 PM