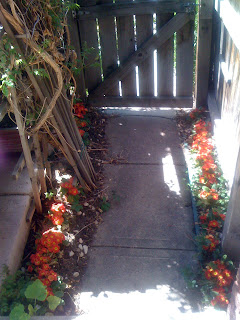 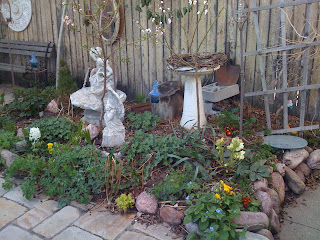 PRIMROSE PATH --
At left, photo shows my short primrose path from back door to side gate.

PERENNIAL PRIMULA--
Harder to see in this photo above, but the bright red and yellow blooms are primula purchased for about a buck at a big box store. They look hot house, but are actually hardy and act as perennials in my secret garden's microclimate, which tends to be at least a couple of weeks ahead of the rest of the landscape, thanks to heat from brick house and garage and wind shelter from fences, and a southern exposure. Primroses don't want too much sun. Those above are in a shade garden and the primrose path gets shade from fence. Once sun gets too high in the summer sky, tho', I pull out those along the path and add them to shadier beds or borders.


HEAD DOWN THE PRIMROSE PATH


You're jonesing for early spring color and itching to plant anything green, but you're also well aware of manic-depressive springs that swing wildly from blizzards to balmy sunshine. Ever-popular pansies aren't your only fix.

Head down "the primrose path." Shakespeare coined the phrase in Hamlet to describe pleasure, and primroses deliver plenty.
Chaucer mentioned primroses, too; and many primroses hail from the British Isles. In fact, the British obsess over primroses and competitively grow hundreds of species.

The common name "primrose" means "first rose," though primroses really aren't roses at all. Wild European primroses sprang up as harbingers of spring and symbols of first love, blooming—as love is wont to do—suddenly in unexpected places.

There's a growing interest in hybrid primroses, available in big box stores for as only about a buck—a big value considering the little darlings take two years from seed to flower. Like little nosegays, the hybrids sport groups of small flowers surrounded by tongue-shaped, scalloped-edged leaves. Cheery, colorful hybrids come in inky purple, mustard yellow, magenta and red. Many have bright yellow eyes. They resemble African violets, but are much hardier.

HOW TO PAMPER PRIMULA

• For quick color, purchase hybrid primroses, then harden plants off, allowing them to spend a few nights on the porch or patio so they can adjust to radical change from greenhouse to outdoors. Group primroses in a hanging pot or use them to fill your windowboxes or containers. Later in the season, transplant them to the garden.

• Primula fare well down to about 20 degrees Fahrenheit, but cannot tolerate intense sun. Situate them in beds or containers in shade or part shade. Plant primroses in the right spot in your garden, and these little plants with hot house looks will deliver perennial pleasures in some growing zones.

• Once established, they require dividing every couple of years. When plants start looking weak, dig up the crown, split it apart, amend the soil with compost, then replant.

• Primula require regular watering or they quickly wilt and often won’t bounce back.

• Primula appreciate compost-enriched soil. Since they flower vigorously, they're heavy feeders. Try fertilizing with liquid seaweed, which is organic and won't burn.

• Hybrid primroses come in a variety of colors: yellow, red, pink, violet. The violet ones are the weakest, and the yellow hybrids tend to perform best.

This article appeared in a slightly different form last spring in the GROW section of The Denver Post.
Posted by colleenwordsmith at 9:29 PM