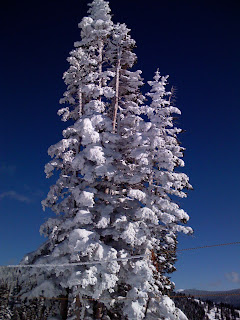 Colorado is home to two types of winter people: those who describe snow in such poetic phrases as “champagne powder,” and those who say “that white s___.”

Since Old Testament times and Homeric oral tradition, snow has drifted into poetic process. The Prophet Isaiah claimed that “...though your sins be as scarlet, they shall be white as snow.” Homer wrote of “words like winter snowflakes...” and the snowless Elysian plain untouched by winter’s heavy storms.

Perhaps you’re not a skier or a shredder or even a sledder. Perhaps you’ve lost your childlike adoration of winter’s magic, or perhaps you never found it. Maybe you have Spring Fever, but if you tend to groan when the forecast calls for snow, catch the drift of writers who found inspiration in the pretty precipitation.

“Nature is full of genius, full of the divinity; so that not a snowflake escapes its fashioning hand.... The same law that shapes the earth-star shapes the snow-star. As surely as the petals of a flower are fixed, each of these countless snow-stars comes whirling to earth...these glorious spangles.”
-- Henry David Thoreau, Journal, Jan. 5, 1856

“At Christmas I no more desire a rose
than wish a snow in May’s newfangled mirth’
But like of each thing that in season grows.”
-- Shakespeare, “Love’s Labour’s Lost”

“The hiss was now becoming a roar--and the whole world was a vast moving screen of snow--but even now it said peace, it said remoteness, it said cold, it said sleep.”
-- Conrad Aiken, “Silent Snow, Secret Snow”

“It snowed and snowed, the whole world over,
Snow swept the world from end to end.”
-- Boris Pasternak, “Dr. Zhivago”

“His soul swooned slowly as he heard the snow falling faintly through the universe and faintly falling, like the descent of their last end, upon all the living and the dead.”
-- James Joyce, “The Dead”

Has given my heart
A change of mood
And saved some part
Of a day I had rued.”
-- Robert Frost, “Dust of Snow”

“The snow had begun in the gloaming,
And busily all night
Had been heaping field and highway
With a silence deep and white.”
-- James Russell Lowell, “The First Snowfall”
Posted by colleenwordsmith at 2:10 PM