THE WRITTEN WORD: Encounter With a Young Writer After My Book-Signing Yesterday 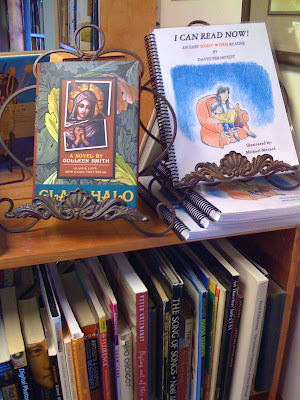 Yesterday, after a book-signing I did at the invitation of a local bookstore, a young woman approached me. She was petite, pale, brunette. She wore a canvas messenger bag across her torso, and clutched some notebooks as if they were her child. We were at Fireside Books & Coffee in Englewood, Colorado.

“So you own a publishing company now,” the young woman said, a statement not a question.

"Friday Jones Publishing," I said, trying to peek at messages on my iPhone.

“Yeah,” I admitted, not really up for a conversation, feeling somehow drained from standing up to speak about my novel to a room filled with strangers, including this young woman.

But people in bookstores tend to be gentle people. I tend to like people who like books.

And this girl seemed friendly enough, curious. “So you worked on that book for almost 27 years? she asked, astonishment twinkling in her eyes.

“Off and on,” I said. “I wrote another novel in tandem. When I got lost on one, I went back to the other.” I wondered how old she might be. “Are you still in school?” I asked. She had a dreamy, authentic look in her eyes. Her face was entirely unlined, a smattering of freckles across her little nose and plump, ivory cheeks.

She announced herself a novelist many times over, this girl

“I’m 17 years old. I’ve already written several novels," she said. "But they’re childish." She had long dark hair. She stared up at me.

"So do you have a writing program at your high school?" I asked, remembering how nervous I used to get whenever talking to a "real" writer while I was a student in the Iowa Writer's Workshop. Suddenly, I saw myself in this 17-year-old.

She told me she was in a small, experiential learning high school with only about 100 students. "So we don't have much. I like short stories," she said; and we clicked.

"It's one of my favorite forms," I said, now truly interested in our conversation.

We spoke of sentences. Short stories. Plot. Characters, and whether they needed to change.

She nodded. We shared a giggle over our agreement.

I knew she had it bad, the writing bug. I detected her literary fever. “It’s good to experiment,” I said.

“Then you must like all the Dracula books out now,” I said.

And then they were calling for a group photo of the authors.

“Colleen,” I heard my name called.

“That’s me,” I said. I wish I would have asked her name. I wanted to tell her, “Run! Run from writing: It’s too difficult. Cultivate a career in gardening.” I wanted to say, on the other hand, “Follow your writing. It will inform your life with wonder and gratification.” But instead I said, “Good luck with your writing.”

And then I took my place among five other local authors lined up before the fireplace at Fireside Books & Coffee as she watched.

I wish I had thought to give her a copy of my book.

Colleen Smith’s debut novel Glass Halo, set in Denver, was a finalist for the Santa Fe Literary Prize and was praised in the latest issue of The Bloomsbury Review. The novel is available online and through your favorite bookstore.

Posted by colleenwordsmith at 7:31 AM