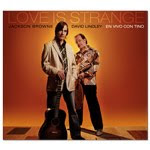 “Love is strange": That's an understatement, and also the title of the 2-CD fiesta of acoustic, eclectic, mostly Jackson Browne songs recorded live in Spain.

Love is strange, yet no more so than David Lindley--the man Browne calls “a longtime friend and compatriot” and also “maestro.” Lindley is strange in terms of unabashed quirkiness: runaway sideburns, loud polyester shirts, epic tales of headcheese, cheesy references to “Elvis,” and oddball self-portrait caricatures on his website.

Mr. Dave also is strange in the sense of the hermit, as Browne explains in his entertaining liner notes describing “stalking the wild Lindley.”

Lindley performed on Browne’s albums from “For Everyman” (1973) to “I’m Alive” (1996) and joined the tour again last year. Lindley’s strings add more than historical tones to old songs such as “For Everyman” and “Call It A Loan.” His twangs and twists make these old songs new again.

Browne has polished his vocals against four decades of performing. His sometimes gravely delivery sounds authentically melancholic. Browne gets a bit bluesy, but does not stretch for high “Disco Apocalypse” notes of his days of yore.

Lindley, however, does. Mr. Dave’s startling clear falsetto is fully intact on “Stay.”

Along with classics from Browne’s canon, “Love is Strange” includes songs by Lindley and others. Fringe fans might find themselves annoyed at rambling introductions in Browne’s “Espanol di California” and Barcelonian lisp. A couple of Browne’s songs are covered by friends who are popular recording artists native to Spain, where cuts were taped live at five gigs.

Initially, I was disappointed that instead of Browne, a woman I’ve never heard of sings “These Days.” But Luz Casal’s charming accent—particularly the way she says, before the song, “Hey, Yackson”—won me over, and Lindley’s fiddle licks transform the existential heft of this classic. Following the last lyric- “Don’t confront me with my failures; I have not forgotten them”--Lindley tickles a jaunty fiddle riff that leaves listeners more uplifted than the original track did.

In the end, I found myself wishing Casal had added backup vocals in the tradition of Rosemary Butler.

Crank it up and imagine the players performing in casa. One of the best aspects is hearing the tuning, and the bandmaster’s directions such as—on “Your Bright Baby Blues”—when Browne says, “No, it’s you; it’s you; it’s you, David.”

Love is strange; and love is gracious, too. Jackson Browne generously shares his secured limelight with some Spanish peers; and the amigos pull off this transcontinental musical summit with simpatico and aplomb.

Colleen Smith’s critically acclaimed first novel, “Glass Halo,” is available at bookstores, Amazon.com and GlassHaloNovel.com. The novel was selected from among 448 entries as a finalist for the Sante Fe Literary Prize.

Posted by colleenwordsmith at 5:41 PM