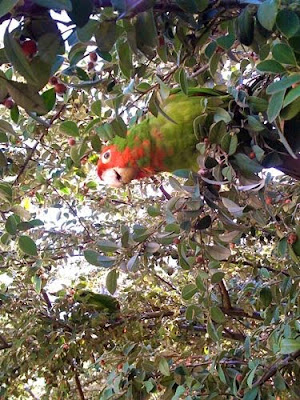 When the documentary "The Parrots of Telegraph Hill" came out in 2005, one of my editors called me and told me, "This is your kind of film." She knows I am an animal-lover, a tree-hugger, and a colorist.
The documentary sounded fascinating, yet I never got to the theater. And then I forgot about it.
Until recently, when I was preparing for another trip to San Francisco. My editor, whose husband used to be a report for The San Francisco Chronicle, sent me a list of curious San Francisco highlights. She mentioned that she walked up Telegraph Hill, but never saw any parrots.
I remembered her recommendation, years ago, of the film.
In San Francisco, I had the good fortune to meet up with two friends for a walk. The three of us share similar interests: walks, museums, nature, art. We decided to take a long walk to a secret garden mentioned in a guide book. The secret garden was in a long corridor-like space on a hill. Charming and romantic, the garden had exotic features such as Chinese lanterns and elegant birdbaths, bright bouganvillea and mossy fern-covered shady spots.
Parrots in a secret garden
As we made our way down the stairs and around a corner, one of my friends ahead of me remarked that the tree was shedding something. It had been raining off and on, so I wondered it she was seeing or hearing raindrops. Then I looked into the tree and saw them: parrots!
"The parrots! The parrots!" I said, sneaking back up the stairs and pulling out my iPhone.
My friends had not heard of The Wild Parrots of Telegraph Hill. We watched them for a good long while as they feasted on the red berries in the trees. We took photos and got quite close to them.
"There you go," one of my friends said as one of the parrots made his way down a branch. "He's posing for you."
And then, suddenly, with a screech, the parrots flew off in a hurry, lime Jell-O green on the wing.
Parrots with personalities: Lessons from so-called bird brains
Today, I picked up the film at Denver Public Library. Tonight, I watched The Wild Parrots of Telegraph Hill. I laughed. I cried. And I almost flew out of my chair after the delightful surprise ending.
If you get this DVD, be sure to watch some of the extra tracks, too. Colorful and uplifting!

Posted by colleenwordsmith at 10:05 PM