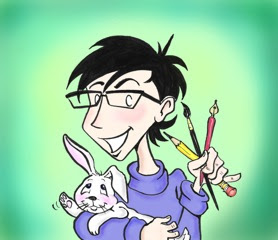 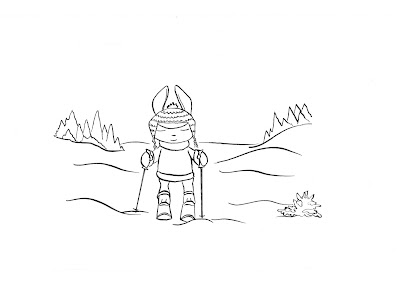 Here's a link to a gallery of "Laid-Back Skier" illustrations by Patty Leidy - see her self-portrait at right.
Below, one of the earliest ski bunnies by Patty Leidy for "Laid-Back Skier."
And here's the tale wagging of how these ski bunnies came to be:
When I was preparing to publish my first novel, "Glass Halo," Jesse - one of the Friday Jones Players - opened a Facebook page for me. I was upset. I had railed against Facebook without really knowing what it was. "I don't have time for Facebook," I argued. "Besides which, I like my privacy."
Jesse gave me one of his sage young adult looks and said, "If you want to sell this book, you have to have a Facebook page," he said.
Jesse is wise, so I said "Okay." But I left the Facebook page dormant for months.
Until another Friday Jones Player, Josie, told me, "You really need to get into Facebook." Josie is wise, too, but I dug in my heels. "Things will happen on Facebook that you would never expect," Josie said.
So I jumped into the Facebook vortex. And how! I post regularly now, and I enjoy Facebook, I admit. Jesse was right: Facebook helped sell my "Glass Halo." My first novel reached readers I knew only through Facebook.
Moreoever, I met the illustrator for my second book - "Laid-Back Skier" - on Facebook. I'm not sure how Patty Leidy and I got connected, but I began noticing her "Cafe Neurotic" comics on Facebook. I loved Patty's style and the fact that she is a fan of bacon and cupcakes. Her gags made me smile and sometimes even LOL. Mostly, I admired Patty's artful drawing. Genius flows through the ink in her pen.
When I figured out that Patty lived in Denver, as do I, I messaged her about the possibility of commissioning her to do some drawings for the ski book I envisioned. Yes, she was interested!
At our first meeting, I explained my idea for "Laid-Back Skier." She showed me her sketchbooks: Moleskin books filled with doodles and drawings in a wide range of styles.
Patty and I began meeting at the coffee court outside Nordstrom in Cherry Creek North.We worked through some initial drawings, but Patty's first sketches of people--tho' expertly rendered--were not matching the playful spirit of what I had in mind for "Laid-Back Skier's" messages that apply to everybody's ups and downs.
One day, on the first of the month, I posted on Facebook one word "Rabbit." Saying "rabbit" on the first of the month is a common British superstition to bring good luck.
Patty saw my Facebook post and shot me a message of a single word: "Bunnies!"
"Ski bunnies!" I realized, would be perfect.
Patty hopped to and drew some initial bunnies to set the style. I knew we were on to something better than the humans. We met several times to collaborate on the bunnies, their fur color and eye color, their attire, equipment, actions, and the general gist of alpine landscapes. We created scenarios to illustrate the truisms I'd written to compare alpine skiing to life.
Along with ski bunnies, we added foxes, birds, and even a rare lynx. In the end, Patty completed 38 illustrations for "Laid-Back Skier." Each is adorable and expertly rendered with expressive faces, dimensional shadows, and creative coloring.
Here at Friday Jones Publishing, we all have our favorite illustration by Patty. The cumulative effect of the illustrations plus all the other elements of design and the truisms in "Laid-Back Skier" should bring a smile to reader's faces - even if they've never ever been on skis.
Which is the case with Patty Leidy, making her illustrations even more impressive.
Wag your tale, Patty Leidy!
And thank you Jesse and Josie for dragging me into Facebook. I'm red-in-the-face about my initial resistance.
P.S. To contact Patty Leidy about commissioning artworks, e-mail her at
Patricia Leidy hkit1@mindspring.com

Posted by colleenwordsmith at 10:16 PM